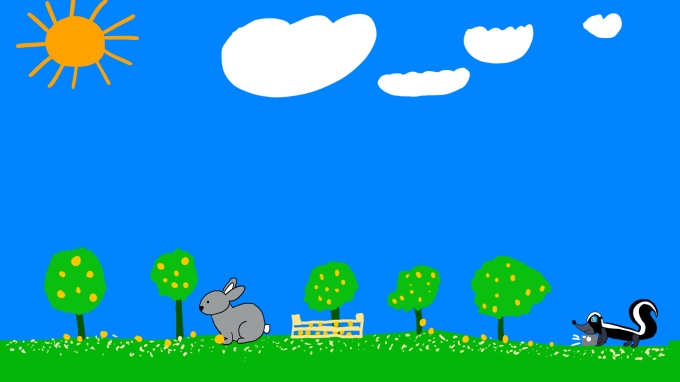 Once upon a time, there was a badger. This badger was called Borzi and he lived in an orange grove in Spain. He had a small cottage, and every November, when the oranges were okay to pick, he always picked a dozen oranges from the orange trees. But when he got up one of the days in November, he saw that there was not an orange on the orange trees!

Borzi panicked because he didn’t know what to do now. “What do I do now !? I made the orange juice, the orange cake, and even the orange souffle out of it.” Borzi told himself. Borzi asked all the nearby animals if they had taken the oranges off the trees, but everyone said they didn’t even touch the oranges. Borzi went home sadly when he heard a car sound in the distance. He quickly hid among the trees and when the people got out of the car, Borzi saw that those people were the orange pickers.

Borzi looked after the case, and when he saw Tapsi-Hapsi, he began to follow him so that the bunny would not notice him. Borzi also took a camera with him to have evidence. Tapsi-Hapsi went and stopped at one of the orange trees and took the oranges off the tree. Borzi took photos and with that he had proof that Tapsi-Hapsi, the bunny, was the orange thief.

A week passed. Tapsi-Hapsi was set up as an orange picker and so he could already take oranges off the trees and get money for it. Borzi and Tapsi-Hapsi made an orange cake together and they were nominated for the Orange Cake World Championships and took home the 2020 trophy!

The story was written by: Gergő

The drawings were made by: Gergő

The source of the photo is from Pexels